This article was written by our marketing coordinator and tasting room associate, Brenna Ritchey, for Antonio Galloni’s Vinous.

“I read an article the other day that told me, in no uncertain terms, I was doing wine wrong.

It claimed that young people—especially millennials, who, if you have not heard, are single-handedly destroying Each and Every Industry—care less for wine than they do the narrative of it. They overvalue the story and undervalue the product. They believe what is in the glass is “good” only insofar as they know how it got there. And (these sweet, misguided souls!) they don’t know the difference between being captivated by wine, and wine that is genuinely captivating.

As a millennial (and a young one, at that—newly-legal, baby-faced, in the early stages of planning my disruption of the high-end wine industry), I think a lot about this supposed generational gap between older wine-drinkers and young people like myself. Millennials may be excited—in a wide-eyed, inexperienced kind of way, according to many—about the world of wine. But we’re also on track to become the largest fine wine consuming generation by 2026.* And young millennials—that is, the 21-to 26-year-old crowd to which I belong—well, 28 percent of us are drinking wine on a daily basis. And it’s not the syrupy White Zin our predecessors imaginatively bagged up, boxed, and stamped “delicious.”

I think there is something big—something almost subversive—about this new generation of wine drinkers and enthusiasts. We’re calling into question the ways in which the wine-drinking public has frequently used tradition, age, and “Old-Worldism” as tools of exclusion, of elitism. In response, we’re disrupting the industry, but doing so in ways that are actually rewriting the rules of the game, dismantling the very structures that have schooled us in how to drink and appreciate wine, and rebuilding them from the vineyard up. Ever-rebellious, we’ll put wine in cans. Or maybe kegs. And then growlers. We’ll embrace the screw-cap, and the belief that wine can (and perhaps should) be just as compelling as its vibrant, eye-catching label. We’ll trust our pallets over profligate price tags or 94-point ratings—even if our palates are defiantly whispering, rosé all day.

Because wine is not, and has never been, reducible to what’s in the glass. And so, most importantly, we’ll trust the story.

In August 2018, nearly a year after wildfires swept through the Napa Valley and left a trail of devastation in their wake, I visited the region for the first time in my life. The fires had burned for 23 days. Yet the vast majority of the valley’s wine-producing land had emerged unscathed. The vines were thick with leaves, sweeping upward like phoenixes out of ashes, and bursting with bundles of late-summer grapes. There was something unmistakably defiant about their existence, I thought as we entered the valley. Something sacred about the story of this particular season, of these particular grapes and the winemakers raising them. How thick-skinned and resilient both were. Theirs was a journey marked by a literal trial by fire. The crop was its story; the two were inextricably linked.

As a wine drinker, I want to know the story of what’s in my glass—not so that I can over-sentimentalize how hard-fought a particular vintage was, or soapbox about its distinct “personality” as I pour a glass for my oenophile dad. But how and why we drink the wine we do impacts how and why we enjoy it. Context matters for wine the same way it does for reading a compelling book: start with the prologue, and the subsequent chapters take on new meaning—more than we ever could have imagined if we’d skipped it entirely.

And so maybe I’m not crazy in thinking that the 2017 Peter Michael Cabernet Sauvignon vintage will taste richer and deeper knowing that vineyard manager Javier Aviña talked his way past firefighters during the Napa blaze to reach his grapes in the Les Pavots vineyard and tend them. When the winery lost electricity, threatening its still-fermenting 2017 harvest, issues with the backup generator were handled with grit and some duct tape.

Or maybe the 2015 Paige Cuvee Chardonnay at St. Helena’s Moone-Tsai, with its custardy tang and caramelized-pear silkiness, transforms into something close to perfection when you know Larry and MaryAnn Tsai named the small-lot release after their daughter. They hoped, one day, she would come to enjoy wine as much as they did. 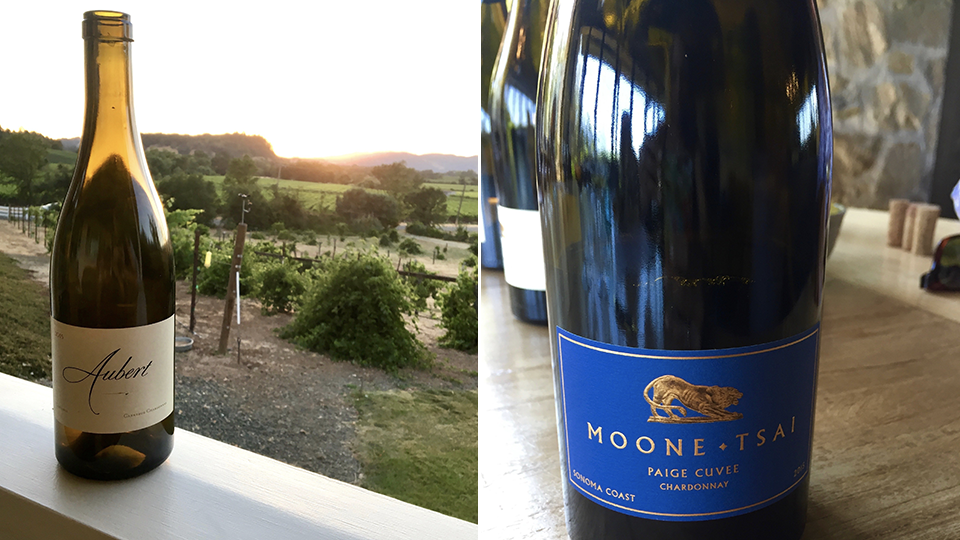 Two wines that embody the essence of story and substance.

In the end, it’s the story that’ll stick with us, that we’ll mentally dog-ear and revisit time and again when we taste our favorite wine—the story behind the bottle, yes, but also the one we write when we open it. We were drinking Aubert Chardonnay when I told my father that all I really wanted to do post-collegiately was work at a winery, and he nodded slowly and said, You’d be good at that. And when, months later, those plans actually materialized, together we opened the very first bottle I’d ever gifted him—a Carr Chardonnay from the northern Sta. Rita Hills (where I work in the tasting room)—I was sure that the story of my love of wine was written gradually, almost accidentally, over the course of countless shared bottles with my dad.

Surely, narrative matters. Wine has always been more than the sum of its parts—more than its skin, soil, acidity, sugar, sun exposure, climate. It is equal parts story and substance. Maybe that’s a troubling thought for the aficionados who’ve long held that wine ought not to be so subjective. Except that it is—especially for this new generation of wine drinkers who are digging in their heels at the belief that a critic’s 96-point rating carries much, if any, weight. When have numbers ever told the whole story?

By the time I left Napa Valley after nearly a week-long immersion in the region, I had tried plenty of exciting wines: ruby-red Cabs heavy with spice and Chardonnays as melt-in-your-mouth as phyllo dough. But I’d also been excited by those wines—by the stories they told and the people who were tangled like vines within them. Maybe this is the reason so many young people are falling in love with wine, drinking it daily, cheers-ing to the hows, whys, and whos behind their wine instead of its 94-point rating. Millennials aren’t doing wine wrong so much as we’re pointing out the flaws in well-established wine wisdom, disentangling enjoyment from expertise. Lean into it, this evolving traditionalism.

Better yet, raise an aluminum can to it.”

Stay Up To Date