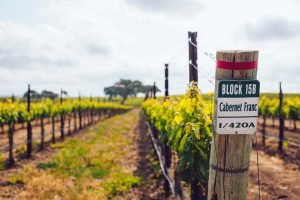 Cabernet Franc is one of our favorite varietals to make (and drink) at Carr Winery. We have been producing a single-varietal Cabernet Franc wine since 2000 and it has become our #1 seller. Typically Cabernet Franc is used as a blending grape, but we prefer to make it as a 100% varietal wine. Because of the popularity of the grape we have expanded our winemaking to include three single-varietal Cabernet Francs sourced from two vineyards (Rossi & Camp Four) in the Santa Ynez Valley. When grown correctly, this Bordeaux grape can really stand alone and has delightful aromas and flavors of earth, roasted peppers, black fruits such as blueberry and raspberry, dark chocolate, and spice.

What to pair with Cabernet Franc: The natural acidity in the wine allows it to pair so nicely with a variety of foods such as: Herb Roasted Chicken, Tri Tip with Smoky BBQ Sauce, Goat Cheese, Mushrooms and so much more.

Ageability of a Carr Cabernet Franc: Cabernet Francs are ones that can lay down in the cellar for 10-15 years. If you are enjoying a new release we suggest decanting it for about 30 minutes to let the wine open up.

Camp Four Vineyard is owned by the Chumash and was planted by John Belfy. The vineyard is on a 1,400-acre parcel of land with 250-acres planted. The vineyard produced its first crop in the harvest of 2003. On that land there are 3-acres of Cabernet Franc which is grown just for Carr Winery. It is located in the Los Olivos District AVA in the Santa Ynez Valley. The warmer climates and clay-loam soils of this site shows great potential for producing fully ripened, mature fruit. 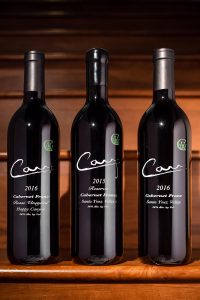 2017 Carr Cabernet Franc, Santa Ynez Valley
This Cabernet Franc from Rossi Vineyard and Camp Four Vineyard was aged 20 months in French oak barrels. The Winefills the glass with beautiful deep shades of mahogany. Hints of licorice tease on the nose as more defined notes of white pepper fade in. This wine encompasses an overall sense of natural flavor components like roasted bell pepper with mellow notes of violet and herbs, finishing with a wonderful balance of good acidity and soft tannins.
Clones: 01 & 332
570 Cases Produced
$39 Bottle

2017 Carr Cabernet Franc, Rossi Vineyard, Happy Canyon
Rossi is a single-acre vineyard in Happy Canyon that produces some of the best Cabernet Franc in the area. The long hot summer days and hard rocky clay soil allow the vines to produce deep, rich flavors. This wine has a nose filled with dark fruits and peppers followed by a soft, yet gripping mid-palate and a long finish.
Clone: 01
100 Cases Produced
$50

2016 Carr Cabernet Franc, Reserve, Santa Ynez Valley
Made from the four best barrels of the 2016 vintage, this Cabernet Franc was aged for 32 months in French oak. The fruit for the Reserve Cabernet Franc is grown at Camp Four Vineyard and Rossi Vineyard in the Santa Ynez Valley. The extra time in barrel creates an enticing and full-bodied wine with aromas of fresh jalapeño and sage. Flavors of smoked meat and green bell pepper fill the mid palate with a smooth, enduring finish of blackberries and pepper.
Clones: 01 & 332
100 Cases Produced
$60

Join the Cabernet Franc Club!   **Next shipment goes out May 4th

Each shipment will include 3 bottles of Carr Cabernet Franc chosen by the winery. This club is perfect for the Cab Franc lover and will include both current releases and library wines.

Stay Up To Date