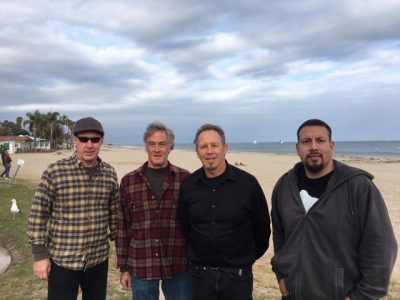 The Mustangs are: Marc Hesthal (guitars and vocals), David Parker (bassist and vocals), Brian Slattery (guitars and vocals) and Gustavo Franco (drums). This Santa Barbara, California based group was conceived during the summer of 1999, when the founding members (including former drummer Jon Legreid) combined from the Phoenix of other local bands. It was apparent that these musicians shared a common musical direction and set of goals — to make music that is enjoyable to play, promotes positive mental imagery for the listener, and can motivate an audience to get up and dance. These musicians believed that a good band should be a balanced between playing covers that people relate to, and ignoring existing musical genres and blending diverse styles to create music that may cross the boundaries established by contemporary classifications.

From the beginning, the creative energy was so abundant that the only obvious choice was to begin the long and meticulous process of recording an album.

Throughout the writing and pre-production that ensued, the compositions slowly and purposefully developed their own unique character. The artists meshed an unlikely musical combination, pairing the arrangement techniques born of classical training with the intensity of a rock band, and the feeling of blues and Jazz. The goal of keeping the natural desire to do something that the performer and listener can enjoy came to fruition. People have described the resulting music as possessing the same emotive qualities found in film scores, often using the term visual, and emotionally uplifting to describe what they hear.

The self titled debut album edited to seven tracks and approximately an hour of the very best music. The bands second album release is “Highway of Life”.